LUNCH IS NOW BEING SERVED

With the new dining room set up I promised Brie I would have people over now and then and get out of my "Greta Garbo" style of wanting to be alone. 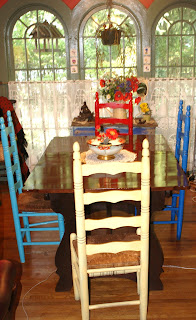 Early on in his disease, old Bob, did not like people in the house.
Workmen in here became a nightmare.
He still knew most of the family but he did not enjoy them coming in either.
To avoid his rambling and discomfort I pretty much locked the door and we became
a twosome for the next decade.
Looking at the changes in my life, I had a lot of anger, so I put my gorgeous mahogany dining room table on the side walk and a big sign "FREE". The chairs had been my grandfathers so I gace each of the girls 3 chairs. Poof dining room gone.
I had several sets of Limoges china (I am after all an antique dealer) both girls got a set I am not even sure Sabrina wanted it. Bobby wants nothing.

Somehow in my very busy mind I felt better. No more people over, no more cooking for others, "just you and I ,my love" is what went through my mind.
That became quite a chore as he wanted less and less food. His teeth became bad from the medication but I did  not want him to be more confused with dentures. I made all soft food.
Often 3 choices. Flan, rice pudding, very well soaked bread pudding. Often he would refuse all 3.
Finally we went to the bottle stuff but that he did not like much either. He lost weight and I worried about stuffing him with anything he would eat.

After 13 years Bob gave up , he had been a fighter. Well at the end he became a fighter. The kind gentle soul was lost. We knew all along that he would die, Alzheimer is a dead sentence the minute they give you that diagnosis. How many years you have is a ???????

I was totally lost when he was gone. A lot less work and yet I even missed that. It felt strange to sit and relax. It did not feel right. Within six months almost to the date I was in the hospital and had a serious surgery. I kept hearing the words from our meetings at the Alzheimer group :"Every one in our group has been ill or died within 6 months after a loss".
Say what? Here I was in a hospital and I did not truly want to go on. I wondered why I had even come out of the surgery. It would have been so good to go to sleep on the operating table and not wake up.
Did I think I would meet him somewhere? Not really but there is always that slight hope...will we meet again...will he show up one day in my bedroom like a cute cloud who would come and go....Nah...
I am realistic. I have seen and lived in too many situations.

My return to my own reality did take time. Depressions came and went like the summer storms. Dark clouds over my head and then wake up to sunshine one morning and be happy to be alive. Then by evening the cloud comes and gets bigger and darker. I go to bed and cry some more.
My big helper and truly my own Valium pill comes with 4 legs. My Bijou, Maltese, knows me. He looks at me with his big black eyes and come to lick me, hugs my body in bed and I sleep protected.

I decide to take up a hobby, years ago in the late 1960's and the hippy age, Bob and I, we made necklaces and sold them in his shop. Not much design then but lots of color. We went to Venice and stocked up on Mille Fiori Beads and sold them all a week after we got home. I love beads. I was in my element. Bob too loved beads he had made a giant curtain to fit between our door opening. He was a demanding beader all of his had to be real vintage crystal beads. The sun would play in them and it was a spectacular albeit very heavy piece. Later he sold it to the Shilling heiress who was a good client of ours. So....I decided that I could go back to that and make necklaces.

Equipment had changed quite a bit from threads to the enormous selection of beads on the internet.
With daughter's help I opened a mini shop in a small mall with other dealers. I did well for almost 3 years and then the mall had to close and we were all out of selling spaces and had to leave within 7 days.
At this point I figured that I am 81 1/2 with the 82 looming very closely and it was time to just stop.
Last Christmas I was working late in the evening to get enough stock together and now I like to go to bed early with my kindle, enough work.

So that period gone in my life and finding more and more of who I am  when I am riding solo , I decided to clean my work studio and try and find space for the hundreds of beads I have in stock. Change the studio back to a dining room. Not fancy like before but what they now call country chic. Found the table and chairs at a consignment shop, got my loyal family painters on the job and voila. A new phase coming.

I promised Sabrina that I would put the dining area to use and invite people.
People? I can count my real friends on one hand. After all I had shut the door a decade ago.
So to make good at my promise I asked my good friend L and C for lunch.
They have taken me out almost every week and L. being a proud male will not let me pay.
Time turning the tide.

I was delighted when an email told me they would come and then I sat down and panic set in.
What to cook? I suddenly felt like a new bride who is expecting her mother in law to show up for lunch. Mind you, my friends are very low key, do not expect a gourmet lunch like at the Tour d'Argent.
Somehow I just did not remember what I had ever fixed for lunches...yes...I had done the Belgian Bouche a la reine, but it is so hot to turn on the oven. I went blank again and Brie said:"Mom, just do cheeses a glass of wine and grapes ". OK that sounded easy. So I had a table with 5 different cheeses and different ham and salamis wrapped around mozzarella, Kalamata figs, croissants, Asiego buns, grapes and melon. For dessert I did turn on the oven and made my mothers flan.

I was a hit. My guest seemed to enjoy it a lot. Table was full like a buffet and enough choices.
I stopped shaking and started to enjoy this renewal. It would have been so much better if I had been able to hear them. Their voices are on the low sound , but then I just occupy all conversation and tell them my life story. They are gracious and let me do my monologues they are used to it by now.

Next invite is out to the kids for Christmas eve like we always did when daddy was alive.
I know what to cook then and the kids will help and bring stuff.
Life is good.