I decided to put my Thursday way back: 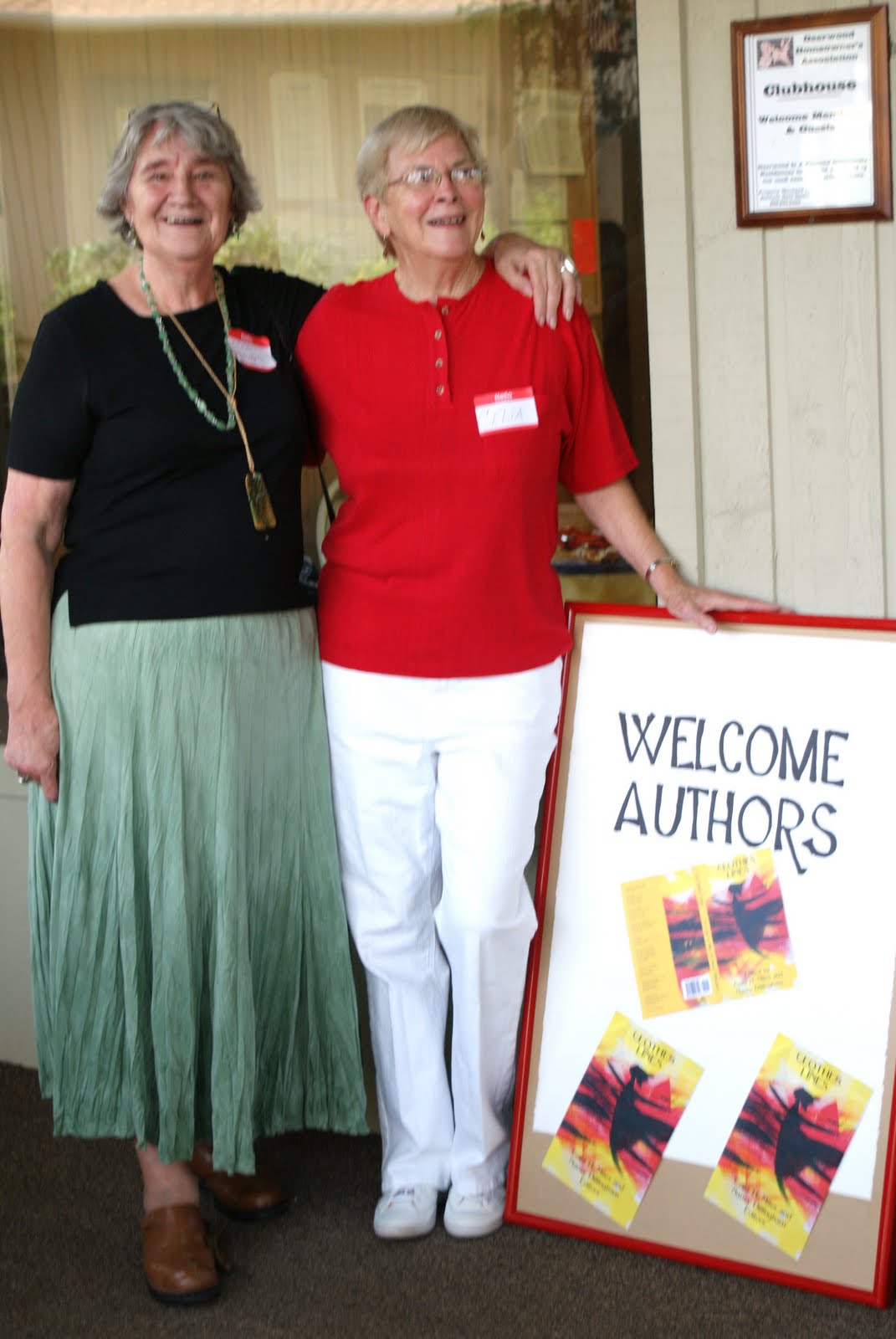 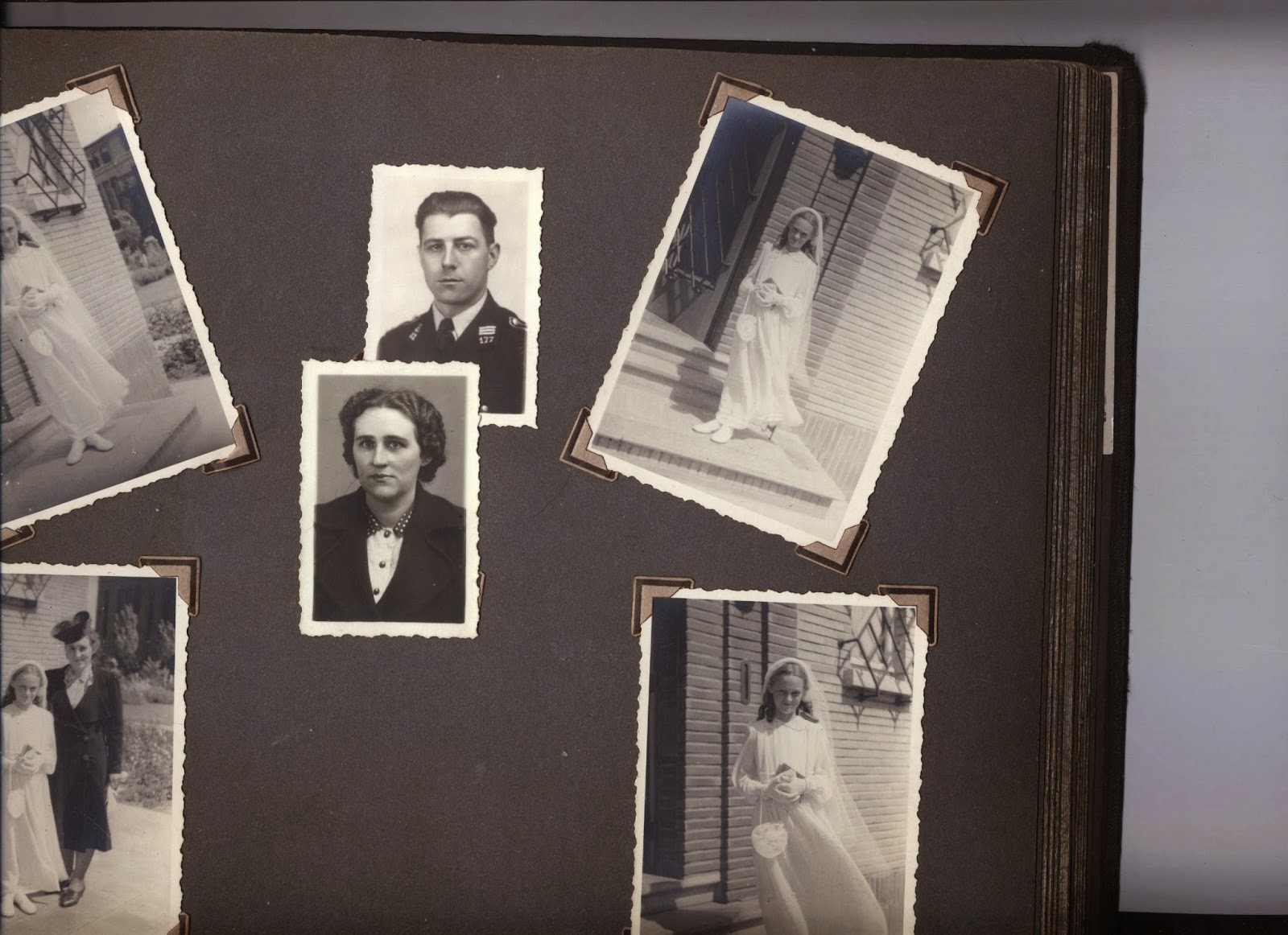 Here I am at age 10 doing my Holy Communion two years early with permission of the bishop.
It was 1942, the middle of the war.
We did not have a camera but when I visited the house of a friend she took photos.
The center photos are my Mom and my Dad, he was a police man.
They look very strict and they were , these photos were from their passports.
Stern people , these were bad times.

If I find the story in these blogs I will print it again, not sure if I did.
My photo with Celia Miles (author of many books) the day we all met, all the writers in this anthology were NC writers.

Looking back to it all I truly feel a bit sorry for that girl, she was very shy and very unhappy.
But it did not last my whole life.
It may not make sense but I was truly just born when I was 36 and met the one person who always loved me. I can't complain.

Posted by Jeannot at 5:09 PM 2 comments: Links to this post

My son who has agoraphobia has made a first step into an outside world he has not seen in a decade.
So he came home from 3 days in trying to fit in and help in a business without panic attacks.
First announcement he made to me:
"Mom, have people become so rude in the last decade?"
He was just surprised at some of the comments and language on the phone.
I told him to wait till he needs customer service somewhere.

Yes, even in the South people are no longer as friendly as they used to be.
I hate to say it but it has been my experience.

Posted by Jeannot at 4:58 PM 2 comments: Links to this post

I have been the lazy one.
Issues with back problems kept me on the couch.
Viewing of angels flying in the snow and girls with frilly dresses dancing on the ice had be mostly occupied.

When we live with hope and drop the despair in a dark corner then we can come out triumphed !

Today I feel it is such a day.

The week was hectic.
My number two girl after months of itching due to formaldehyde allergy decided to pick it up a notch and get cellulitis in her knee ( nothing to do with the little bumps on your thighs when you became a bit older) I think that is called cellulose. Only painful to our eyes and mind.

Cellulitis is quite a pain wherever it shows up, on top of it Brie hit her knee while moving the office.
To make it short she had to have a mini surgery and is starting to be on the mend. You can't keep this girl down. She is so stubborn.

Daughter one is continuing a very demanding job , customer service for Wen and other products.
It is difficult, she is not in sales but in the damage control dept and every conversation is timed.
You go over time and you get it from the supervisor. At least she has a job and now health insurance she can afford.

But then the miracle man ,my last born, who has been ill for years.
This is Mental health week.
Until the 20 years of so ago, I gave little interest or thought about mental health.
Then I got in in large bundles, first my husband with dementia/Alzheimer for 13 years.
Then a daughter in law with many demons in her mental state. I loved her, a lot, still do. She is no longer with us.
One grandson with Asberger Autism.
A second one with seizures and mild autism.
A daughter with personality disorder. We just thought she was a bit difficult. She is doing much better trying to keep out what causes her grief.
The biggest mental illness beside my husband I had direct dealings with is my son.
Years in the house with agoraphobia. (No it is not about spiders)
For close to a decade this affected his life completely.
While in my house the last years he managed to to get an Associate degree with Phoenix University.
He thinks it is nothing but a lot of money still to pay off.
I think he did very well, top honors.
Finally we saw a light at the end of the tunnel. A group contacted him about making a video for TV, following him , giving him psychiatric help and showing the world what this disease does to a person and the people around them.
My son and I were on clouds. Phone calls came from important people in the field, phone interviews left and right. It sounded like it would be the only help we could ever get.
Then the news came, the TV station wanted a series about ghosts in houses. Bye Bye mental health, just serious stuff like ghosts????

We had called people in the field left and right. Most did not want to bother because he is on Medicare.
Then many said: Come at my office. Meet me at the library. So what explanation of agoraphobia do you not understand said my son! I am stuck at home, I need help at home. He could not even cross our narrow street. Then one lady in another city was glad to counsel by phone , her fee to be paid ahead of time. No Medicare allowed. I thought that might do it until I read what she charged. It would be costing him $2000 a month. Phone calls were charged by each minute, for instance.
Many days I would go check him in his bed to see if he was still alive.
The depressions came and went but were almost always there.
My heart ached, I was afraid to die and leave him without a change and he might land on the street.
Some of our family members thought he was too lazy to work.
No amount of explanations helped.
I know many people outside our family felt that way.
I knew...I had an uncle with this disease. He owned a large plot of land with green houses, he was a horticulturist. He never left his property for decades, he was a fixture by his gate and friends just came by to say hello to him at the gate. My parents and my grandfather, I remember, were not kind to this man.
My mother's sister was a nurse and kept the family going all these years.
I think he was in his sixties when one day he said :"I want out , and out he went".
He never had someone tell him he had a mental disease. That was in the 1930's to the late 1950's.

Finally Bob got a hold of a group in Asheville. They did house calls.
They came to talk to him, I think that is about 2 1/2 years ago, from then on he was in good hands with counseling 3 times a week and drugs from the psychiatrist to make it easier.
They told us it would take a long time. There was a plus that he did not drink alcohol and did not do illegal drugs. He does smoke cigarettes.
First he learned to go across the street with a worker.
Then around the block, that took a lot longer to accomplish.
So step by step ,one day he went in the car with his sister and drove around for 1/2 mile.
Now he drives about 2 miles but still not able to go on main roads.
His dr. said he needed to up the anty and try to find a volunteer place where he could try and work to learn again to re-interact with people. He has lost these skills. To be able to be in another place for a few hours, to learn to deal with several phobias which lurk in his mind.
For instance he could not go to the gas station nearby as he was sure he would run into a hold up.
Now he goes in and out without even thinking about what he just did.
So with the help of his doctor he found the most unusual place and if he can make it there he will be well on his way to a normal life. We are both hoping and hoping some more.
His departed wife had gorgeous tatoos all over her body, she had found a terrific artist in our town.
Mario Bell is one of the best I have seen yet.
So Mario knew Bob for decades and Bob thought he could be a manager for  his shop as a volunteer.
No strings attached. It took a long time to convince Mario that he needed his help.
Mario afraid that at any moment Bob would bolt outside in panic.
So today is his day 3 there.
Long hours.
Good, weird, strange, pretty, ugly , men, girls (you have to be 18) , women, the whole lot of humans who would like some art work to wear.
I have problems with it, to be honest. But I learned to tolerate their wishes via my daughter in law, she was brilliant, had a Master degree, had a heart of gold and loved tattoos. So deal with it, Jeannot.

I think he will learn a lot there about people!
Let him heal, NOW!
Posted by Jeannot at 11:55 AM 2 comments: Links to this post