The artist and some of his work: 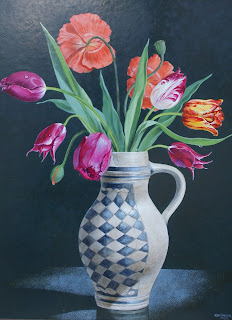 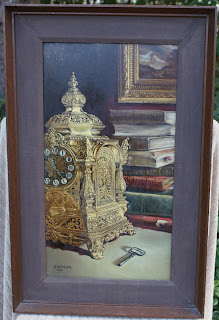 Robert George Kensinger was born an artist.  While his brothers would try and teach him on how to repair cars he was more interested in getting wild flowers for his mother so he could draw them.

He served in the Army during WW2 , came home to get his schooling under the GI Bill.  Hartnell college in Salinas, California was his first formal art education under the guidance of the well known watercolorist Leon Amyx.  After graduation he went on to the Chouinard Art Institute in Los Angeles.  Chouinard was the premiere art school on the west coast at that time with teachers such as Edith Head and many of the top animators from Disney.  He finished with his schooling and moved to San Francisco to start his fine arts career.  He had several one man shows during that time until he moved back to Santa Cruz in 1968.

In 1969 he married Jeannot and adopted her two daughters. Then he moved the whole family to the Costa del Sol in Spain. It was during the five years in Europe that he won two very prestigious awards in Belgium.  He received the title of “Commandeur” and won the Vermeil medal and the Medal from the City of Brussels.  This was a contest from all artists living in Europe.  “Les Arts en Europe” was a show under the umbrella of the late Queen Marie Jose who left endowments for the arts and music.  Bob won these honors two years in a row, in 1973 and 1974. At that time he was the only American to have won these.

He and the family returned to the USA, moving to Hendersonville in 1975.  Bob acquired an agent in Florida with much of his work being sold in that state.  His wife opened up Heritage Square Antiques which also served partly as a gallery for his art.  Unfortunately Robert was diagnosed with Alzheimer disease in the late 90's and did not paint for the last 13 years of his life.  He passed on September 5th, 2010 and we all lost a great artist.  A painting of his trompe l’oeil artistry will soon be donated to the new court house for many generations to admire and be inspired by.
Posted by Jeannot at 4:56 PM

Jeannot,
When you said your husband painted, I didn't realize that he was a truly great Artist.
His paintings are beautiful. They reach inside and touch the soul.

I came across this site when entering Mr Kensingers name into google. The reason for entering it is I was walking down the street today in San Francisco and a man was haveing a garage sale in front of his apt building. A small painting jumped out at me. I was immeadeately taken with the charm of the piece,very unpretentious, but done by an obiviously talented artist.It charmed me into buying it right away. It is a painting of a "Carnaval Glass" pitcher. It is titled on the back "Carnaval pitcher" and has a ink printed signiture on the back "Robert Kensinger" "1961" The painting itself is small, 4 1/8 by 4 1/8.
If you would like to see a picture of it I would be happy to email you one. I just thought you might like to know that Mr Kensinger's art is out here and appreciated. I love my little picture.
Cheers and Happy Holidays.
Eric

Thank you, Eric for your comments.
The message touched me.
Enjoy his work and look around the area for he has hundreds of his paintings hanging about in San Francisco.
Thank you for writing.
Jeannot

Thank you for your response Jeannot.I do love the piece and have it hanging on the wall over my little kitchen table now. It is right at home. I have been an art and antique lover all my life,even as a small boy growing up in Minnesota I would be drawn to the sweetest and best items at garage sales and auctions.
I will look more closely now for Roberts work. As i'm sure you know San Francisco is rich with art. These little treasures are lovely little "Bon Bon's" for those of us who must consume art in order to live a full and rich and sweet life. I am sorry to hear that Robert passed this year. It does sound like it was a difficult time for him and you. I hope your able to hold the sweet memories of your life together close to you and let the discouraging and sad ones blow away on the wind.
Have a lovely holiday season Jeannot.
Cheers
Eric

I am so sorry to hear of Mr Kensington's passing. I am blessed to have four of his small paintings: strawberries, grapes, cherry tomatoes, and feathers. I collected them at art shows here in Florida back in the '70s and was so honored to meet your husband -- he was an amazing artist.

Thank you for your note Ms Furgeson, enjoy the paintings.
He has left us with these little touches of his very soul, he was 100 percent an artist. Even when he did not know us he still remembered his work.
Thank you for your nice note, made my day,
jeannot

i am his grandson renan i was excited finding this

Hi, I'm so sorry to hear of his condition and passing. I bought one of Mr Kensinger's paintings in Florida in the late 70's, early 80s. It is a painting of a basket of apples (#585.) A true trompe l'oeil. Every part of it from the shadow of the staples in the basket to the dew drops on the apples. I wrote him a letter soon after I purchased it telling him how pleased I was with it. He answered me with a detail description on how he chose the apples etc. A great asset to my dining room. Robet Davis

Mr. Bob, thank you for your input.
It is so nice to hear from people who have admired and own some of his work.
He leaves us in awe when we look at his paintings. We just will not forget him.
He is very missed in our family but 13 years years of suffering and frustration for him was enough.
Thanks again,
Jeannot Kensinger

Bob was a wonderful artist. I have three of his paintings. In one of the paintings of a brass and copper pitcher he painted his reflection in the pitcher. Bob had a great sense of humor and was a good friend. I worked in his " Century Antique Shop" in Hendersonville. It was a blessing for me to know him and his family. He is missed by all who knew him.

My mother was diagnosed with Alzheimer's in October 2013 and she has 2 of his works. I feel very blessed. She purchased them in Highlands , NC around 1983. The painting is #872 a teddy bear and she has a Santa statue. I was going to sell these at our estate sale in August but think I will hold on to them as knowing he had Alzheimer's makes them even more special! They are both beautiful!

Thank you for your message it made my day.
Bob leaves memories in so many homes.
Thank you for writing.
Jeannot

I am so happy to find this site and know how others appreciate his work. I purchased two, #624 and #648 at a show in a Florida mall. They are dated 1981. We were on vacation and came across this wonderful exhibit. We were asked to vote on best of show. When the show closed and I collected my 2 paintings I was told they were voted first and second. I don't remember what the price was but I wouldn't part with them at any price. My husband and I are 88 and I still admire these two pictures daily.
As a little bit of personal info, my husband has Alzheimers and we live in assisted living with him(Bob) in a locked down unit and me having a nice apartment in the same building. Wish I could ask Bob some questions about his technique. I treasure these 2 pictures. One is a blue and white candle holder, red candle just snuffed out, smoke drifting away from wick. The other is an egg, reflected on black background and white feather beside the egg. They are both sooo realistic I shielded them from the wind on the way to my car.