Legend has it in the Native American world of symbols that the Hawk as your guide is one of insight.
Sabrina had claimed him eons ago when we went to Native American lectures.
Sabrina has a connection with our Natives.
Whenever she passed out when she was a child she would start rambling of all the Indians and the wagons around in a circle and she was petrified. At first we thought she had seen to many cowboy and Indian movies but it happened over and over again when she was totally out of it.
My aunt had a stroke and one arm lame, Brie touched her arm and fainted on the spot and started her story all over again.
Later on in hypnosis she found out she had been an Indian warrior.
So she continues to accept her hawk.

About 20 years ago ,I was washing dishes in the sink and looking out to my hedge right in front of me and there landed the biggest bird I had seen close up in the wild. He looked at me and I was happy that a window separated us. His look was not inviting and the beak was awesome. My bird book is right at my sink so I quietly moved to see what that was. I have been watching birds forever in my yard. He did not move he just looked into the window, perhaps he saw himself in the reflection perhaps he was wondering
what a strange bird I was op close. I was thinking an eagle but soon found him as a red hawk. He was there for a long stretch and was in a trance over him. When he flew away he looked even more spectacular.
I can still remember the scene. Nature boy, Frank, said that they do not come often in a town situation with all the traffic and less greenery and forest.

So a couple of days ago I walk Bijou early and I always check out what birds are flying about , I love the chickadees who visit our feeders and a titmouse or two. Our streets are narrow, so I can see the dead tree in front of next small street.
That tree is so neglected and the owner is not removing it. I watch it all the time as for sure one day it will come down and hit the house in front of me, maybe even part of ours. It was a very grey morning and about 8 am. The dead tree is nothing but black bark with long branches sticking out all around the trunk, it is very tall must have been a pine (I think).
So I look up and see a LARGE bird , I stop in my tracks and get closer, he is facing me but still high up. His belly seems like all white feathers. I am thinking an owl, we have them around the house. This was one giant owl. He does not move. Neither do I.
Bijou is pulling on the leash he had no interest in birds. I ignore Bijou. The bird start to clean his feathers and now I see
that he is white and brownish mixed on the belly and I see his head clearly, not an owl, a hawk, a bird of prey, no doubt in my mind. I quietly go back home much to the chagrin of Bijou with a full bladder, and I grab my camera. Would you not know it, the battery was dead. I gave up went back outside and HE was still there.

I gave up and took Bijou for his usual tour of trees and mud puddles he loves.
Upon our return at least 20 minutes had passed and HE was still there.
I went into the house trying to see if I could quickly charge the battery but no such luck.
From my computer I could still see him and I was happy. I was telling myself that I had to see him fly away.
I started to type and poof he was gone and I missed it.

I had the nerve to tell myself that he was going to come back and greet me.
My camera would be ready.
Next day I got out in the afternoon with the while Maltese dragging me all over the place and I was so exhausted,
I look up at the tree and there HE is, this time his back at me.
Ran into the house forgetting my fatigue and started to shoot photos. 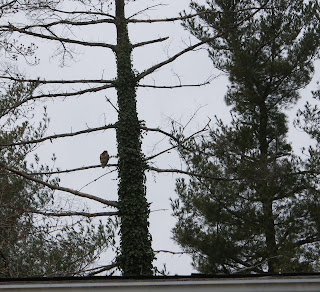 I watched till he flew away in a ballet move of wings and grace.
This one much larger then the one I saw years ago.
I will continue to look for him. He must like that tree even when the ravens come to sit close to him and make their loud objections heard. They too love that tree and come there every day sometimes 2 but most of the time 3 at a time.
Life is great when one has the time to look around and stop.

Beautiful!! Thanks for sharing your story, it truly is a gift to see a hawk!!

Hi, Girl, since then we have seen him many time, he is sticking around.