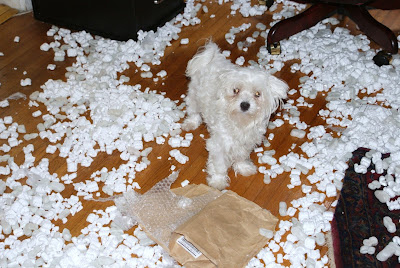 A sign in my sons's bedroom tells me that he likes dogs better than people.

I am so beginning to know that is a truth for me too.

If you had asked me 10 years ago I would have told you that my "dog days" were over. Once we buried "Julie" decades ago. I told myself "no more dogs".I just knew I was a cat person. Cat's came and went and we never were without a miauw around the house. I adore them.

Then my husband became ill with Alzheimer's and year by year the conversations at the table, in the bed and car dried up.
I am a talker, much to the chagrin of many people, I am an open book and
ask me anything and I have a respond or a story.
The silence in the house bothered me a lot and I was missing the love too. I am a hugger, a kisser, I need the touch of someone who responds to my caring. Husband and I must have hugged dozens of times in a day.
Slowly that too diminished. He was confused about our relationship about who I was and he no longer wanted to be touched. (That has changed again and now he is back to hugging all day long).

I kept thinking that maybe I needed a little lap dog, something to hold and kiss all I wanted to and it would feel soft and warm. I did not even think that I would get a lot of love in return. I just needed something to hold that was my own.

It was voting day , I needed something in the pet store for my water feature , in the pet store were a bunch of puppies of all kinds and colors.
Suddenly Bob looked at one, picked it up, then said : this is ours.
I want it.

I had no idea what kind of white fur ball this was and how much it was going to cost. the black eyes peered at me from under all this white fur and I fell in love.
What is it? I asked the man behind the counter.
A Maltese, a male Maltese.
He is 600.00 but we just had a bad week and if interested right now 450.00
he has papers etc......
Out came the credit card home went the puppy.,

Once the fur ball (smaller than the cat) was home I figured I had been emotional about this and now would start the hard work and I was in no mood.
Bob named him "TOTO" because he loved the movie with Dorothy etc...
Problem was he also called him "The Cat".
We had some time before we convinced him that this was a dog.

Toto turned out to be a jewel to train, usually hard with Maltese breed.
I read everything on the internet about that breed and was happy to read that indeed that was going to be my fur ball to hold and hug all day long.

Enter a tragedy in our lives, my daughter in law, passed on in May 2008.
Accidental overdose, mixing meds from over the counter with hers.
She was 32. She is so missed.

Son moved back home and suffers from agoraphobia, has not been more than 20 yards away from the house in over 3 years. We had to drug him to bring him back to NC. They had two dogs, a Corgy and a rescue old lady dog. Daughter and I ended up in a plane to Texas to take the animals out of the shelter (relatives had put them there). We then drove home with 3 cats meawing and a quiet dog.

So now I am faced with 3 dogs, it took me a long time to decide on the fur ball but three of them? I told son that the extra cats was too much but many were waiting to adopt them.

Not long after the four footers all became good friends an accident took Toto away. I thought my heart would stop. Immediately I had to fill the void and got another Maltese. Bijou is his name. French for jewel.
He is that indeed.

I read a lot about Joan Rivers and her dog being her support group when her husband died, Cindy Adams had surprise gift of a puppy delivered to her after her husband died and she writes about that wonderful experience.
When I read all that I was still dog-less and could not figure out why these broads made such a hoopla about something that looked like a wet rat.
Now I know betteR.

I can't remember anything that happened between Toto and I in the years we shared , I blocked it out. Often I do not remember his name. The love and caring that Bijou brings to me is so enormous it feels like he wants to fill the void and add some of his own to just make me happy.

He is at my feet no matter where I sit. Follows me from room to room and watches over me. If I cry he jumps on my lap and wants to wash my face.
His dark black eyes penetrate mine as if to say "It is ok, this too shall pass".
If I take a nap he sits on top of me and lets me know if someone is at the door.

He is a friend of the Corgy (Carwen) because he knows that she has taken the lead in the house and she is the boss. She is a doll. Smart and quiet.
So does this jewel ever get into trouble? Every day.
It is the chewing game, after all he is still a puppy but when he got a hold
of a huge bag with peanuts while I was writing and not paying attention this did happen :"photo above"

Yup I will join these other gals and tell you that I have gone to the dogs and for most part I like dogs better than people.
Posted by Jeannot at 5:34 AM

One week after she died, my neighbor was killed in a car accident. She was a lovely woman with whom Greg and I had gotten know quite well over the years. She left three tiny motherless kittens so we took them home. I think they were my oasis during (still are) all of this. It's funny how the universe works. I'll be up this weekend and hope to see you. Love, Cayta